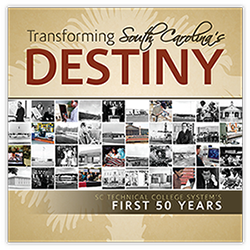 In the late 1950s and 1960s, South Carolina faced a serious problem. Young people were leaving the state, where agriculture was the economic base, to take jobs in other states where industry was growing. The state had no mechanism in place to offer training services to its citizens or to help draw industry into the state. In 1961, a joint legislative study committee was formed to examine this problem. The subsequent recommendations made by this committee resulted in one of the most significant pieces of legislation in South Carolina's history.

Guided by this committee's recommendation, the 1961 General Assembly enacted legislation which authorized the establishment of the South Carolina Advisory Committee for Technical Training. This act provided for an eight-member committee, appointed by the governor and representatives of each of the state's congressional districts.

One of the advisory committee's first actions was to appoint a coordinator of technical and industrial training and move immediately to implement the industry training program Special Schools (known today as readySC™) which was mandated by the authorizing legislation.

Once the Special Schools program was underway, attention turned to the establishment of the companion program of permanent technical education institutions (now the state's 16 technical colleges). The main goal in planning the system was simple and pragmatic — to make a suitable training program available to any adult South Carolinian who wanted to obtain a marketable skill.